The story involves dancer Eun Ho-jeong (Mun So-Ri), wife of the unfaithful Yeong-jak (Hwang Jeong-min) and mother to a seven-year-old son. She meets a teenage boy and named Shin Ji-un (Bong Tae-gyu) and the two share an intimate friendship despite their age difference. When Ji-un’s father discovers their relationship, he threatens to tell her husband. Meanwhile, her father-in-law (Kim In-mum) dies and her mother-in-law (Yun Yeo-jeong) quickly starts up another relationship. A Good Lawyer’s Wife was screened at the 2003 Cannes Film Festival.

Organised by the Daiwa Anglo-Japanese Foundation

The fourth seminar in our 2012 series Leadership: People and Power in the UK and Japan looks at Women and Leadership.  Japan remains one of the OECD’s poorest performers on gender equality issues, despite numerous attempts over the years to improve the situation. Only 11.3% of Japanese Diet members are women (a proportion recently surpassed by South Korea, with 14.7%). A survey of listed companies by Toyo Keizai last year found that women accounted for just 1.4% of management positions. And what about the UK, which elected its first female Prime Minister over 30 years ago? Even here, men in leadership positions still far outnumber women, and the gender debate is very much alive. Do we need quotas for female representation at the highest levels?  Our Japanese speaker is Dr Wakako Hironaka, one of the few women at the top level of Japanese politics, who became a State Minister almost 20 years ago, at a time when it was very difficult for women to succeed in this field. Our UK speaker is Suzi Digby OBE, Founder and Principal of The Voices Foundation, well-known as both a charity leader and a choral conductor. The seminar will be chaired by Joanna Pitman, former Tokyo Bureau Chief of The Times.

Dr Wakako Hironaka is a former Member of the House of Councillors (1986-2010) and a former Vice-Chair of the Democratic Party of Japan.  Among her many roles, she has served as State Minister, Director-General of the Environment Agency (1993-94), Chair of the Committee on Fundamental National Policies, and Chair of the EU-Japan Parliamentary Group. Dr Hironaka has also been active internationally, as a Vice-Chair of Global Environmental Action, Chair of GLOBE Japan, and member of the World Commission on Forests and Sustainable Development, the Earth Charter Initiative, and International Science Advisory Board of UNESCO. She currently serves as Director-General of GEA, and as a Board Member of the Energy and Resources Institute, Earth Charter Commission and PA International Foundation. She was awarded the Grand Cordon of the Order of the Rising Sun by the Emperor Akihito in 2010.

Suzi Digby OBE (Lady Eatwell) is an internationally renowned Choral Conductor and Music Educator. Born in Japan, Suzi lived internationally before settling in London/Cambridge. She has trailblazed the revival of singing in UK schools and the community over two decades. Suzi founded and runs four influential arts/education organisations: The Voices Foundation (the UK’s leading Music Education Charity); Voce Chamber Choir (one of London’s finest young Chamber Choirs); Vocal Futures (Nurturing young [16-22] audiences for Classical Music); and Artsworks (Leadership and ‘Accelerated Learning’ for Corporates). She is a Professor at the University of Southern California, where she is creating a Masters in Arts Leadership. As a conductor, Suzi’s 2011 debut with the Orchestra of the Age of Enlightenment (Vocal Futures’ Bach’s St Matthew Passion) was met with outstanding critical acclaim. Suzi is Trustee of Music in Country Churches, among other music and education charities. She is President of the Incorporated Society of Musicians and was Acting Music Director of Queens’ College, University of Cambridge. Amongst many TV appearances, she was judge in the BBC1 show, Last Choir Standing.

Joanna Pitman was educated at Cambridge University where she read Japanese Studies. On graduating, she worked for a number of financial magazines in London before joining The Times. In 1989 she was appointed Tokyo Bureau Chief of The Times, a post she held for six years covering all news out of Japan and major stories in the region. Back in London, she became a writer on international affairs for The Times and did a series of major political interviews for the paper. Changing course, she spent ten years as an arts critic on The Times, and then when her children were older, she joined the strategic intelligence company, Hakluyt & Co. She is a trustee of Somerset House and of the Great Britain Sasakawa Foundation. She has written two books: On Blondes(2004) and The Raphael Trail (2006).

On a winter day, three women with three different stories of anguish encounter each other on a road. The brutal city has expelled them, leaving them with nothing but bitterness. Oknam and Hye-na board the same bus by chance, and they rescue Yoo-jin from her attempted suicide on a snowy mountain. Having no place to rest, they begin their unplanned journey to Flower Island, where it is said all pain and sorrow disappear. On their way, they go through many unexpected events, and realize the journey itself is what heals their inner wounds.

Women Work – in Wood is a touring celebration and showcase of leading female contemporary furniture designers and makers, working in wood, and will include work from London-based Tomoko Azumi, and Denmark-based Akiko Kuwahata, as well as various other international, established and emerging designer makers, who  have all responded to a design brief to develop and encourage innovative design in furniture using sustainable processes and materials.

The design development has in each case been documented to illuminate the decisions regarding techniques and process.  These narratives, as well as the more personal deliberations to do with career paths, will form part of the exhibition showing the richness of skill and approach and add to the debate about design, responsibility, opportunity, expectation and so forth.

The number of women furniture makers is on a steady increase in Europe and particularly the UK. This exhibition is the first dedicated showcase of contemporary work by woman designer makers.

Atsuko Tanaka was one of the foremost members of Gutai, a group which focussed on experimental art forms, their manifesto proclaiming a new relationship between the materials and the human spirit. Within this primarily male-orientated group, Tanaka was particularly unconventional and stood out from the other Gutai members, as indeed she did from other international avant-garde artists of her time. This was due not only to her radical and metaphorical expression, but also the relationship between the body of work created especially between 1953 and 1957, and her way of thinking.

In celebration of the exhibition, Atsuko Tanaka: The Art of Connecting, the Japan Foundation has invited Chief Curator of the Museum of Contemporary Art, Tokyo (MOT) and exhibition curatorial team member Yuko Hasegawa, to discuss Japanese female artists and creatives from the 1950s to the present day, in the context of conceptualism. Going beyond Atsuko Tanaka, artists featured in her talk will also include Hideko Fukushima, a member of Jikken Kobo (Experimental Workshop) in the 1950s, Yoko Ono and Yayoi Kusama, both of whom are internationally recognised artists. Hasegawa will examine how the psychological deconstruction of images of women, both within social convention and common roles, function in the work of Tabaimo and Miwa Yanagi.  She will also explore the achievements ofKazuyo Sejima and Rei Kawakubo, some of Japan’s most influential creative minds.

By tracing conceptualism in Japan, and the significance of these various artists within a post-war framework, Hasegawa will explore the unique politics of Japanese female artists who were, and indeed are, conscious about the relationship between their work and body.

This event is free to attend but booking is essential. To reserve a place, please email your name and the title of the event you would like to attend to event@jpf.org.uk.

Congratulations! Next game final vs USA for the 2011 World Cup.

In this talk, Dr Patessio will challenge the distinction and gap that exists in Japanese women’s historiography between the Meiji ‘good wife and wise mother’ and the Taisho ‘new woman’ by reviewing understanding of late Meiji women’s (in)ability to participate in, and express their opinions on, social and political life. She will also introduce the life-story of Hasegawa Shigure (1879-1941), a female biographer, playwriter, and editor whose activities she has studied in detail as part of her Japan Foundation Fellowship – a marvel of her time who Dr Patessio believes deserves far more recognition than she has hitherto received.

Dr Mara Patessio was a Japan Foundation Fellow in 2010-11 and has been Lecturer in Japanese Studies at the University of Manchester since 2007. Her undergraduate degree at Venice University in Italy was followed by an M.Phil at the University of Cambridge. From 2004 to 2005 she was a JSPS fellow in Japan before she then moved back to Cambridge as a Leverhulme Trust funded Research Associate, working with Professor Peter Kornicki on a project that investigated Edo and Meiji women readers, writers, and their reading practices.Professor Naoko Shimazu will be the discussant for this event – she is Professor in the Department of History, Classics and Archaeology at Birkbeck College, University of London. Her research interests include the cultural history of diplomacy and the social and cultural history of Japanese society.

Booking: This event is free to attend but booking is essential. To reserve a place, please email your name and the title of the event you would like to attend to event@jpf.org.uk.

Japan beat New Zealand in women’s World Cup opener in Germany. Yiki Nagasato opened the scoring after 6 minutes but almost immediately New Zealand equalised with Hearn. A free-kick from Miyama in the second half gave Japan a desserved win.

1. She links arms with you
2. She makes you bento (lunch box)
3. She does her best to help out in your daily life
4. She asks “Do you love me?”
5. She always spends the weekend with you
6. She asks “What were you doing?” if you don’t see her for a day
7. She wants to accompany you everywhere
8. She cleans your room for you
9. She does her best to match her hobbies to yours
10. She’s jealous of your last girlfriend

Personally, I find all 10 behaviours/traits very annoying and I would not last very long with a girl that matches most of them. Do you agree with me or with Japanese men?

It’s hard to say but girl number 4 has got the edge. What do you reckon?

Japan Foundation Fellows Lecture Series III:
Rethinking Mrs Watanabe – changes and constraints in the relationship between Japanese women and accounting/finance under the influence of globalisation
by Dr Naoko Komori 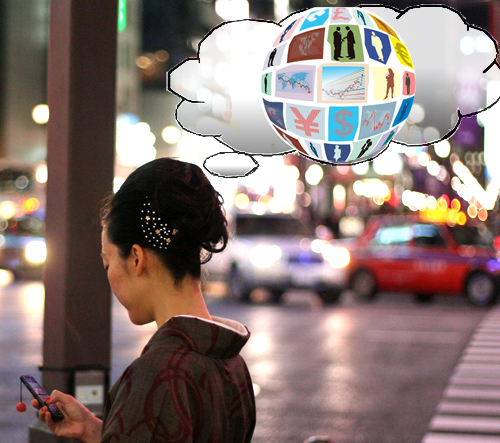 Japanese women have long held the purse strings when it comes to household finance. The skills and activities of Japanese housewives have been attracting attention in the UK since the late 2000s, when the media dubbed them “kimono traders”. This seminar examines how the role played by Japanese women in accounting and finance is evolving as part of the reconfiguration of accountancy and finance happening under globalisation.

This seminar considers the relationship between Japanese women and accounting/finance: how women’s financial role has been shaped historically; the significance of their role in Japanese business and society; and how their relationship with accounting has changed under the influence of globalisation. It also discusses the difficulties involved in acquiring an accurate understanding and knowledge of Japan from outside the country.