Another interesting event organised by the Japanese Foundation, ‘Back to the Future: Japanese Cinema since the Mid-90s’ 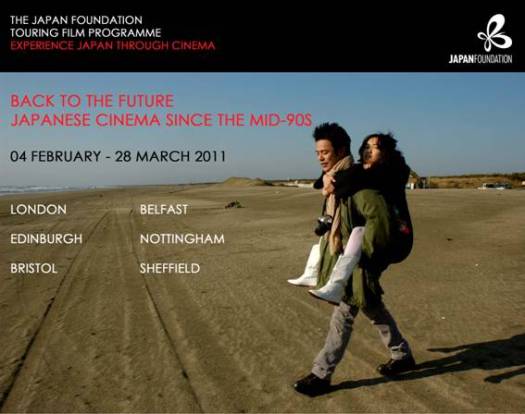 We are delighted to announce details of the Japan Foundation Touring Film Programme 2011:

Back to the Future: Japanese Film Since the Mid-90s which serves up a feast of films from directors who can be credited with playing a major part in creating the current popularity of Japanese cinema around the world.

Full details of the film line-up and the hosting venues can be found on the Japan Foundation website here.

This event is free to attend but booking is essential. To reserve a place, please email your name and those of any guests, as well as the title of the event you would like to attend to event@jpf.org.uk.

Today I started to read a book written by Shoko Tendo ‘Yakuza Moon‘ which I found among others in a box I had left under my bed and that I had read before but I kind of forgotten. The book is a sort of autobiography which tells the tragic events occurring in the lives of the author from a difficult childhood, having a gangster father, to the years spent as a gang member and the drugs abuse as teenager to finish with the difficult and abusive relationships with men during early adulthood. The book was well received in Japan and became a best-seller and even media and critics praised the book with comments such as ‘Born a yakuza’s daughter, by her teens plunged into a world of sex and drugs, tattooed in her twenties… Tendo’s eyes have the knowing sparkle of someone who has been to hell and back.’ – Josei Seven.

The author, Shoko Tendo, with her tattoos, book and daughter.

Travelling on the Central Line from Oxford Circus to Tottenham Court Road…..

Celebrations on a train.

For those interested in art this event looks promising.

The contemporary Japanese cultural scene has embraced a drastic change of direction since the beginning of the new millennium, largely due to the upsurge of Otaku culture and its influence upon many art forms including performing arts.

However, while we can observe a marked change in the cultural landscape during the last decade, the current batch of artists are the latest example of a generation in Japan exploring and creating a cultural scene which reflects their current reality.

In this illustrative lecture, Atsushi Sasaki, a Japanese critic whose interests and knowledge easily cross between many disciplines, from music and philosophy to theatre and subculture, will examine the most critical Japanese cultural scenes to appear since the turn of the millennium and introduce the diverse forms and expressions used by Japanese performing artists such as faifai, an emerging performing arts group which aims to transform the perception of theatre into a type of pop culture.

This event will serve as a guide to the current frontline and emerging trends and players in Japanese performing arts, while also looking to what the future of where these new movements may lead.

According to the Chinese calendar, which consists of both Gregorian and lunar-solar calendar systems, Chinese New Year can begin anytime between late January and mid-February. The year 2011 (rabbit) begins February 3 and after many years without taking part in the celebration this year I’m planning to join the crowd in central London. I hope to have fun and to take many pictures to publish on this Blog.

Japan reached the Asian Cup final after winning on penalties against South Korea. In the final Japan will play the winner of the semi-final between Australia and Uzbekistan. Come on Japan!!

I never planned to talk about politic in this Blog but recent events, with Berlusconi as main negative protagonist (again!!),  have forced me to write this post. I do not want to spend too much time talking about Berlusconi I rather know what you think about him. I really like to know your opinion as it is important for me to find out and understand how a person like Berlusconi is considered by people living outside Italy. Please write a short comment (max 100 words).

Allow me to write the first comment – ‘Italian politic sucks. Berlusconi has ruined Italy and the image and reputation of Italian people’. It’s your turn…

Today, for dinner, I wanted something different, something special to eat. As I was in central London I decided to go to the Japan Centre to buy Japanese food. The Japan Centre is a place well known by those who like Japanese products and Japanese culture but a bit expensive, even for London’s standards. In the big store is possible to buy products imported from Japan such as food, beer and sake, magazines and books and other various items. Today I bought: tofu for miso soup, sushi and noodle. I think i’ll cook noodle with peppers, chicken and soy souce. I’m hungry, I’m going to cook. See you later.

If I’d known…. Now, I think, it is too late. I only  started the flag counter few days ago but I’m already obsessed. I think about flags every second and I check for new flags every minute. I hope there is a cure… If I don’t get a new flag in the next 10 minutes I’ll have an epileptic fit. It’s coming… I can feel it.

This morning I was thinking ‘if I was going to write a Blog on 5 cities, instead of 5 countries, which would I pick? Initially I though it was was a simple task as I was able to easily identify 2 or 3 cities, but I could not decide on the last 2. At the time I’m writing this post the list is as follow:

Do you agree with me? Which cities would you pick?